Rising 420 metres above sea level, Towers Hill affords visitors panoramic views of the City and outlying areas.  It is also of great historical significance.  At the base of Towers Hill and the top end of Mosman Street, is a small monument that commemorates the discovery of gold in January 1872.  A prospecting party made up of George E. Clarke, Hugh Mosman, John Fraser and an Aboriginal boy named Jupiter, found the gold at Towers Hill.  This discovery was confirmed in January 1872 and motivated one of Australia's most frenzied gold rushes, but also led to the establishment of the City of Charters Towers.

Reminders of this gold mining history are evident everywhere.  The footings of Clarke's mine and battery, the Rainbow Mill and the ruins of the Pyrites Works all provide an insight into the juxtapositioning of gold mines and ore processors in the early days on this field.

Other things to see include the remnants of a 1950s telephone line that used early telegraph line poles.  Secure ammunition storage dumps dating from World War II are also dotted around the Hill as a reminder of times gone by. 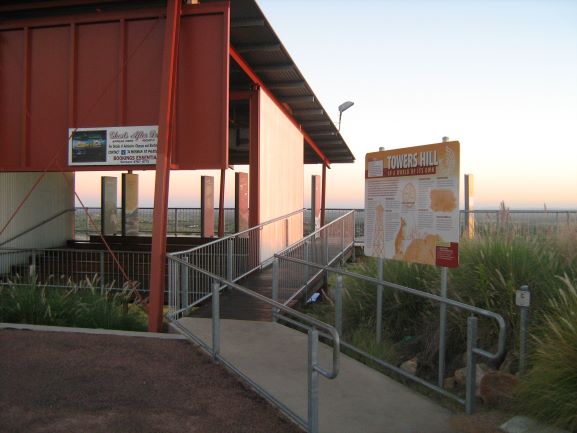