10th Force Support Battalion has been invited to exercise its Freedom of Entry to Charters Towers by marching through the city whilst carrying weapons as part of 150 year celebrations.

Freedom of Entry, also known as Freedom of the City, is a long-standing tradition that can be traced back to ancient Rome.  As a reward for protecting the city, regiments were granted Freedom of the City as a sign of trust and soldiers would not have to disarm or break ranks before they entered.

The granting of Freedom of Entry is the highest accolade a town or city can bestow upon a group or an individual and it is no less readily won or lightly given today than it was centuries ago. 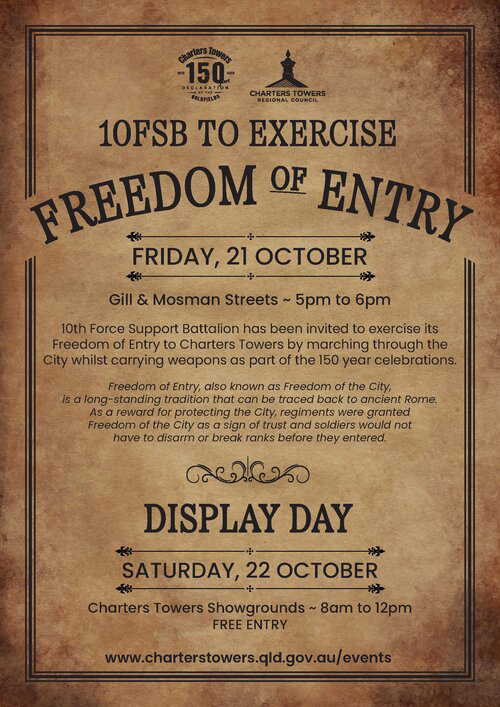 In September 1998, 10th Force Support Battalion was granted Freedom of the City of Charters Towers and that right was exercised for the first time in March 1999 and again in February 2006.

The Battalion was raised in March 1998 as part of the then Logistic Support Force and has often taken part in local ANZAC Day commemorations.

Their role is to provide the Army with niche support capabilities such as Water Transport, Cargo and Freight Distribution, plus Ammunition and Petroleum Distribution to supported dependencies.

Following a march through the City, a ceremonial parade will take place in front of City Hall, followed by an opportunity for the Battalion to socialise with the community at the Charters Towers RSL.

The Battalion is also displaying some of their specialised equipment, used as part of their unique support roles, including cranes, amphibious vehicles and heavy lift capabilities.

The march and ceremonial parade will take place on Friday, 21 October from 5pm – 6pm on Gill & Mosman Streets, with the Showground display on Saturday, 22 October from 8am – 12pm.

More information on the event, including march route and road closures, can be found on Council’s website at charterstowers.qld.gov.au/events.